A study led by Johns Hopkins Medicine researchers suggests that awakening several times throughout the night is more detrimental to people’s positive moods than getting the same shortened amount of sleep without interruption.

As they report in the November 1 issue of the journal Sleep, researchers studied 62 healthy men and women randomly subjected to three sleep experimental conditions in an inpatient clinical research suite: three consecutive nights of either forced awakenings, delayed bedtimes or uninterrupted sleep.

Participants subjected to eight forced awakenings and those with delayed bedtimes showed similar low positive mood and high negative mood after the first night, as measured by a standard mood assessment questionnaire administered before bedtimes. Participants were asked to rate how strongly they felt a variety of positive and negative emotions, such as cheerfulness or anger. 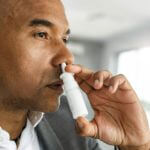