HealthDay News — For US military personnel with sleep disturbances, nightmares are highly prevalent, and nightmares are frequently comorbid with other sleep and mental health disorders, according to a study published in the Journal of Clinical Sleep Medicine. 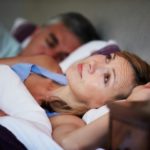