CBT-I via the Internet has proven to be an effective intervention to improve sleep in patients with insomnia, and shown promise as an intervention in reducing depressive symptoms in these patients as well. But is this intervention successful in preventing major depressive episode onset in the future?

Frances P. Thorndike, PhD, from the Behavioral Health and Technology Lab of the University of Virginia presented findings of the 2011–2015 NHMRC/ANU (“Good Night” Trial), a study of 1,148 community-dwelling adults aged 18–64 years with insomnia and subclinical levels of depressive symptoms.

Subjects were assessed prior to the intervention, and at 6 months, 12 months, and 18 months following the intervention. A trial continuation underway will follow patients up to 36 months.

Analysis of the data post-intervention and at 6 months showed that adults in the online CBT-I group experienced bigger reductions in depression symptoms from baseline in depressive symptoms than in the control group (PHQ mean change -2.60 and -1.81 respectively, effect size 1.17, P<0.001).

Adults in the online CBT-I group post-intervention and at 6 months also experienced bigger reductions in anxiety from baseline than in the control group (GAD-7 mean change -1.89 and -1.23 respectively, an effect size of 0.91, P<0.001). There were also reductions in insomnia in the SHUTi group vs. controls post-intervention and at 6 months (ISI score mean change -5.58 and -4.12, effect size 1.78, P<0.001).

Thorndike concluded that an online, fully automated CBT-I is a convenient, easily disseminated, accessible, and low-cost option to address depression. “This can have an important impact not only on affected individuals but also on public health, as depression is a major public health problem,” she said. 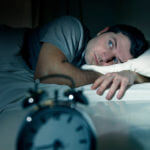