Mounting body of evidence indicates that white matter fiber abnormalities contribute to the pathophysiology of schizophrenia, and are involved in dysfunction across various cognitive domains such as attention, memory, language, and motor and emotion processing in patients diagnosed with this chronic, disabling neuropsychiatric condition. However, much less is known, and conflicting evidence has previously been reported, about the role that the observed white matter alterations play in negative symptoms of schizophrenia including apathy, low motivation, “flat affect,” and passive social withdrawal.

In a new study published in Experimental and Therapeutic Medicine, investigators examined the white matter tracts in patients diagnosed with a subtype of schizophrenia, namely schizophrenia with predominantly negative symptoms. They used diffusion-tensor MRI (DTI) to map white matter tract architecture and assess functional changes in diffusion anisotropy, as well as diffusion-tensor tractography (DTT) to examine the changes in the topical organization of white matter structural network, among 30 individuals diagnosed with the ‘typical first negative symptoms schizophrenia‘ and 30 typical, healthy control participants.

To assess the severity of clinical symptoms, they used the PANSS (7 positive, 7 negative, and 16 general psychology scales) and Global Assessment Scale [GAS; (scores ranged from 1-100, and lower scores indicated severity)]. The GAS average score was 53.8±19.2. The average positive scale score of PANSS was 7.7±1.5, the average negative scale score was 46.6±5.9, and the average general psychopathology scale score was 65.4±10.3. There were no significant differences between participants in the two groups with regard to educational attainment, age, or gender.

Investigators reported that, compared with the control group, the fractional anisotropy values were significantly lower in various brain areas, including the left deep prefrontal cortex, the right deep temporal lobe, the white matter of the inferior frontal gyrus, and part of the corpus callosum. The fractional anisotropy values of each of these brain areas were negatively correlated with the negative symptoms scale scores, and positively correlated with GAS scores.

“The reduction of the fractional anisotropy values in [each of these brain areas] may be associated with the pathogenesis of schizophrenia with typical first negative symptoms,” and “thus, the application of magnetic resonance imaging (MRI) with DTI together with a white matter fiber tracking (FT) is potentially valuable in improving diagnostic accuracy,” the authors concluded. 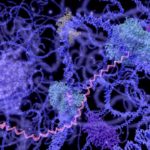