Persistent loneliness in midlife is associated with a higher risk of Alzheimer disease (AD) and other dementias. The good news is that people who bounce back from loneliness build resilience to dementia and AD.

Previous studies that evaluated the relationship between loneliness and dementia looked at one point in time. However, feelings of loneliness change over time. People also cope with traumatic live events (grief, for example) differently, which impacts the trajectory of loneliness.

A study published in Alzheimer’s & Dementia looks at the difference in feelings of loneliness between a point in time and 18 years later.

The researchers examined data from the Framingham Heart Study (FHS) to investigate whether persistent loneliness more strongly predicted the future development of dementia and AD onsets than transient loneliness, and whether loneliness predicted AD independently from depression and established genetic AD risk factors.

The researchers reviewed loneliness assessments from exams 6 and 7, which were 3 years apart. Analyses looked at participants age 45 and older at exam 7, did not have an AD diagnosis at exam 7, and who had a complete follow up on AD and dementia later.

“Participants who reported transient, incident, or persistent loneliness were more likely to be female, live alone, be widowed, be depressed, and have smaller social networks,” the researchers stated.

Of the individuals who developed dementia, 81.2% were diagnosed with AD.

Limitations of this study include that loneliness was measured as a single item rather than a multi-dimensional scale and may not account for real-life experiences of loneliness. In addition, there was a lack of data on loneliness between exams, which limits the assessment of transient loneliness. Also, the researchers could not review the connection between widowhood and loneliness on a deeper scale.

These findings suggest that “mid-life loneliness may be an independent, modifiable risk factor for dementia and AD,” the researchers concluded. “Our results motivate further investigation of the factors that make individuals resilient against adverse life events and urge us to tailor interventions to the right person at the right time to avert persistency of loneliness, promote brain health, and prevent AD. Finally, if reducing loneliness will actually prevent AD onset remains an open question for future research.” 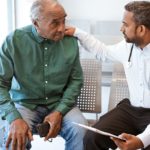