HealthDay News — Medicare has been told to reassess a significant premium increase it had announced that largely stemmed from the expensive new Alzheimer disease drug Aduhelm.

U.S. Health and Human Services Secretary Xavier Becerra’s directive, which was announced on Monday, comes shortly after Aduhelm maker Biogen cut the price of the drug by about half, from $56,000 to $28,000 a year. “With the 50% price drop of Aduhelm on Jan. 1, there is a compelling basis … to reexamine the previous recommendation,” Becerra said in a statement.

The standard Part B premium is scheduled to rise by about $22 this year, up from $148.50 in 2021. It would be one of the biggest annual increases ever. About $11 of the increase was attributed to the potential costs of having to cover Aduhelm at its original $56,000 price tag. There will be no immediate change to premiums for the more than 50 million Medicare recipients who pay the $170.10 monthly Part B premium for outpatient care, but Becerra’s order to the U.S. Centers for Medicare & Medicaid Services could lead to a reduction later in the year, the Associated Press reported.

In June, the U.S. Food and Drug Administration approval of Aduhelm (aducanumab) ignited a backlash from the medical community because clinical trials showed the drug did not trigger any clear improvement in brain function. It also came with safety concerns. But groups like the Alzheimer’s Association argued that the success of Aduhelm could pave the way for even better treatments for the memory-robbing disease.

“It’s always been a progression from first treatments that weren’t by any means all that we hoped for, but were an important first step leading to progressive advances, treatment by treatment, as we learned more and we had further research and development,” Robert Egge, chief policy officer for the Alzheimer’s Association, told HealthDay News last week. “That’s the path we see before us for Alzheimer’s disease.”

Currently, Medicare is covering Aduhelm on a case-by-case basis but is expected to announce an initial coverage decision later this week, the AP reported. However, finalizing that decision could take months.

Alzheimer's Disease
Next post in Alzheimer Disease and Dementia 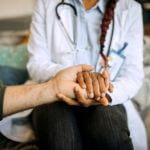 Assessing the Effect of Palliative Care Interventions in Advanced Dementia