Up to 80% of individuals with a past history of depression will get depressed again in the future. However, little is known about the specific factors that put these people at risk. New research suggests that it may be due to the things you pay attention to in your life. 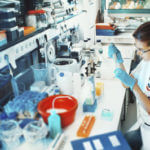