Each year in the United States, there are an estimated 700,000 strokes and 163,000 stroke-related deaths.1 Among the many complications that can result from stroke, depression is one of the most commonly reported. Various studies and meta-analyses indicate that depression occurs in roughly one-third of those who survive a stroke, compared with 5% to 13% of adults without a history of stroke.2 In the Diagnostic and Statistical Manual of Mental Disorders, 5th edition, mood disorders that occur following stroke include depressive features, major depressive-like episode, and mixed-mood features.

Evidence suggests that poststroke depression (PSD) is a form of vascular depression. “Although vascular depression is related to small-vessel ischemia and PSD usually is related to large-vessel infarction (except lacunar infarcts), most studies have found similarities between these conditions, such as lower frequency of family and personal history of depression” and greater cognitive dysfunction and disability vs nonmicrovascular forms of geriatric depression, a review published in 2016 in the American Journal of Psychiatry reported.3 “Thus, a single cerebral infarct may trigger the same pathophysiological changes of depression as slowly evolving vascular ischemia.”

Previous findings identified PSD as the factor that most strongly predicts quality of life in those who survive a stroke, and numerous studies have linked PSD with greater disability, cognitive impairment, increased risk for falls, worse rehabilitative progress, and increased mortality.4 A study revealed significantly higher mortality rates among those who survived a stroke and in whom PSD developed during the acute poststroke period compared with those in whom PSD did not develop (odds ratio [OR], 3.4; 95% CI, 1.4-8.4, P =.007).5

In other research, patients with a score of ≥7 on the Hospital Anxiety and Depression Scale at 3 months post-stroke had increased mortality vs patients whose scores were lower (hazard ratio 1.41; 95% CI, 1.13-1.77; P =.02).6 The connection between PSD and mortality appears to result from increased cardiovascular mortality, to which autonomic dysfunction may be a contributing factor.

The limited number of prospective studies that investigated risk factors for the development of PSD point to the following3:

The etiologic mechanisms of PSD have yet to be elucidated and are likely to include a combination of psychological, social, and biological factors, as with many psychiatric disorders. Associated biological factors supported by empiric data include “alterations in ascending monoamine systems, hypothalamic-pituitary-adrenal axis abnormalities, disruption of prefrontal-subcortical circuits, alterations in neuroplasticity and in glutamate neurotransmission, and an excess of proinflammatory cytokines,” the review authors stated.

Treatment, prevention, and next steps

“PSD has a major impact on both recovery and survival. There is also good evidence that PSD can be prevented,” Robert G. Robinson, MD, FANPA, a researcher and psychiatry professor at the University of Iowa Carver College of Medicine, and co-author of the 2016 review, told Psychiatry Advisor.

The American Heart Association recommends the use of antidepressants for PSD, which is supported by pooled results of 12 trials (eg, involving nortriptyline and citalopram), although more research is needed to clarify optimal timing, duration, and medications.2 In addition, pooled analyses of 8 randomized controlled trials demonstrated that the odds for PSD developing were lower among patients who received active pharmacologic treatment (OR, 0.34; 95% CI, 0.22-0.53).

Findings also show substantially lower poststroke mortality rates among patients taking antidepressants. In a trial published in 2003, for instance, those who survived a stroke and did or did not have PSD who received nortriptyline (100 mg/day) or fluoxetine (40 mg/day) for 12 weeks were found to have a higher probability of survival at 9-year follow-up vs patients who received placebo (59.2% for active treatment vs 36.4% for placebo [adjusted OR, 3.7; 95% CI, 1.1-12.2, P =.03]).7

A pathophysiologic hypothesis for PSD that integrates the various potential underlying mechanisms “into a coherent explanatory model has yet to be formulated…. We believe future studies should attempt to identify the mechanism of specific symptoms or clinical characteristics of PSD rather than the whole syndrome,” the authors wrote. Further research should also investigate “mechanisms of mortality as well as the treatment of PSD using novel approaches like anti-inflammatory drugs or other psychological treatments,” Dr Robinson added. 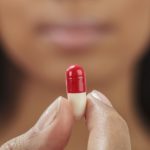