People with inflammatory bowel disease (IBD) have a higher prevalence of depression compared against those without IBD, and depression in patients without previous gastrointestinal symptoms is not linked to a future diagnosis of ulcerative colitis (UC) or Crohn disease (CD); however, patients who experienced gastrointestinal symptoms before experiencing depression are at an increased risk for UC and CD diagnoses, according to study results published in Gut.

Recent evidence suggests a bidirectional relationship between depression and IBD, leading to the belief that depression might be a risk factor for IBD and that treatment of depression may reduce this risk. To further investigate this relationship, a team of researchers for the POP-IBD study group conducted a nested case-control study to determine whether depression, adjusted for pre-existing gastrointestinal symptoms, is linked to subsequent IBD.

Using data from the Clinical Practice Research Datalink, 5874 and 13,681 incident cases of CD and UC were identified, respectively. In addition, 2 control groups (n= 23,496 and n= 54,724) of age- and sex-matched participants were identified.

In the second part of the study, the investigators identified 10,829 cases of UC and 4531 cases of CD with follow-up covering the exposure period of 5 years before their diagnoses, and matched them 1:1 with control individuals without IBD. Three models were used to calculate the odds ratios (ORs) for the risk for CD and UC according to depression status.

The first model calculated risk for CD and UC in 2 subgroups relative to people without depression. The second model was similar to the first model but also adjusted for smoking and socioeconomic status. The third model also adjusted for smoking and socioeconomic status, while additionally applying a broader definition of prevalent depression, including patients with prescriptions for antidepressants but no code for depression or depressive symptoms.

In model 3, after adjusting for all covariates, those with depression alone without previous gastrointestinal symptoms had a similar risk for UC and CD compared with people who did not have depression (OR for UC, 1.13; OR for CD, 1.12). Compared with patients who were not depressed, those who had depression and prior gastrointestinal symptoms had an increased risk for both UC and CD (OR for UC, 1.47; OR for CD, 1.41).

The investigators recognize limitations to their research. Due to the study’s observational nature, errors in coding and data completeness were possible. Additionally, the prevalence of depression found in this study was lower than that of national surveys, suggesting some cases may not have been detected. Finally, no standardized psychiatric tool to evaluate depression severity was available for use.

“Depression in combination with persistent [gastrointestinal symptoms may represent undiagnosed IBD. National Institute of Clinical Excellence (NICE) and British Society of Gastroenterology (BSG) guidelines recommend the use of the fecal calprotectin test, a non-invasive biomarker of [gastrointestinal] inflammation, to evaluate such patients in primary care to determine whether onward specialist referral is appropriate,” the investigators added. 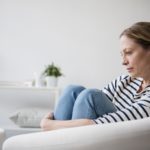