Inflammation, as measured by serum levels of IL-6 and TNFα, is predictive of the onset of depression in adults aged 55 years and older, according to study results recently published in Psychoneuroendocrinology.

To address the lack of longitudinal studies and inconsistent findings with regards to this hypothesis, investigators for the current study conducted a longitudinal study to determine whether 3 inflammatory markers — IL-6, TNFα, and CRP — could predict depression onset later in life. Study data was extracted from the Singapore Longitudinal Ageing Study (SLAS), an ongoing population-based cohort study of older adults (≥55 years) living in Singapore, which included data collected at baseline and at 3- to 5- year follow-ups. Data from 2761 individuals were used in analyses; of those, 1420 were depression-free baseline. Mean age at enrollment was 66.3±7.8 years; 62.8% were women; 90.1% were of Chinese descent; and 5.7% were of Malay descent.

Investigators analyzed SLAS data on baseline serum levels of IL-6, TNFα, and CRP, and also created an additional overall “inflammation score” composited from levels of these 3 cytokines. Depressive symptoms at baseline and during periodic follow-ups were assessed using the 15-item Geriatric Depression Scale. Sociodemographic and lifestyle factors captured in the SLAS survey report were also analyzed.

The primary outcome for the current study was depression at follow-up; logistic regression models were used to assess the impact of inflammatory markers on depression risk. Models were adjusted for sociodemographic and lifestyle factors and medical history.

Results from this analysis align with prior findings that inflammatory cytokines may play a role in the pathogenesis of depression. Further study in a larger cohort — and with a more extensive panel of inflammatory markers — is necessary to better explore these associations.

“Our findings add to mounting evidence in support of the inflammation hypothesis in depression, by demonstrating the temporal plausibility that inflammation may lead to the development of depression, at least in the elderly,” said study authors. “As the association between diverse inflammatory markers and depression is heterogeneous, future research needs to explore the specific associations between different inflammatory markers, other moderating and mediating factors, and depression subtypes.” 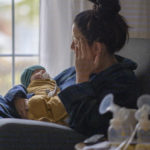 Parents May Screen Positive for Depression Outside Postpartum Period