In patients infected with hepatitis C virus (HCV), female gender may not be associated with increased vulnerability for developing new-onset depression during interferon-alpha therapy, according to results published online in Women & Health.

The study included 155 participants with HCV who were eligible to receive HCV therapy. The researchers used the Semi-Structured Clinical Interview (SCID-I) to assess major depressive disorder and the Hamilton Depression Rating Scale to assess severity of depressive symptoms.

The researchers assessed participants at baseline, during treatment, and 6 months after treatment completion.

Female participants were more likely to have a major depressive episode at the end of treatment (week 24) (P =.018), but not at week 4 or 12.

In both male and female participants, neuro-vegetative and mood-cognitive syndromes increased significantly during the early stage of treatment but remitted by the end of HCV therapy.

“Before starting treatment, it would be valuable to conduct a full assessment of well-established risk factors for new-onset depression,” the researchers wrote. “This screening is crucial to decrease the risk of depression and improve treatment compliance and the well-being of this population.” 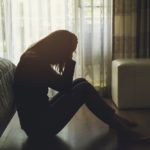 Rates of Major Depression Up Among US Insured, Especially Youth