Anish S. Naidu, MESc, from the Gait and Brain Lab, Lawson Health Research Institute, the Parkwood Institute, St. Joseph’s Health Care, and the Schulich School of Medicine and Dentistry, University of Western Ontario, London, Canada, and colleagues conducted a cross-sectional study with 3 matched groups of individuals, ranging in age from 60 to 85 years, who had LLD (n=23), MCI (n=23), and NDCI (n=23). The researchers recruited the LLD group from geriatric psychiatry clinics in London, Ontario, and selected age-, sex-, and comorbidity-matched MCI and NDCI participants from existing research databases. Participants completed questionnaires regarding mood, cognition, and physical activity. The investigators then measured gait speed, using an electronic walkway, during simple and dual-task gait (walking while naming animals aloud). They calculated dual-task cost as the percentage change in gait speed between simple and dual-task gait. This has been shown to be an indicator of fall risk.

The mean dual-task cost of the NDCI, LLD, and MCI groups differed statistically, at 2.4%±11.4%, 11.8%±9.9%, and 22.2%±16.7%, respectively. The investigators concluded that older adults with LLD performed more poorly on dual-task gait than NDCI adults, but were less impaired than older adults with MCI. The investigators suggested that the increased dual-task cost in the LLD group is the result of underlying executive dysfunction that is less significant than in individuals with MCI.

Study limitations included the small sample size and cross-sectional nature of the design.

The investigators highlighted the importance of considering fall-prevention strategies in older adults with LLD or MCI. They also called for further assessment of whether gait impairment in individuals with LLD is reversible with nonpharmacologic or pharmacologic interventions and for studies to determine the effect of antidepressants on the risk for falls, as there has been some evidence to suggest that the medications increase that risk. The researchers also suggested larger longitudinal studies to explore the mechanisms involved in gait impairment. 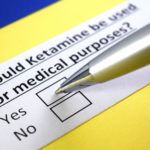 Painting Ketamine in a Bad Light