Changes in maternal antenatal stress-related biology related to depression in pregnancy are associated with altered behavior and biological stress response in offspring, according to research published in Psychoneuroendocrinology. The findings support the hypothesis that antenatal inflammation and cortisol contribute to the mechanistic pathway of a programming effect on offspring.

The study had a number of limitations including a relatively small sample size of 106 women and a broad diversity of socioeconomic status and ethnicity. Additionally, participants were medically healthier than a general pregnant population, most had prior history of depression or other nonpsychotic mental disorders, and although subjects were free from antidepressants at baseline, 8 subjects took antidepressants later during their pregnancies.

The results showed that women with antenatal major depressive disorder have abnormal stress-related inflammation and cortisol levels, a shorter gestational length, neonates with suboptimal neurobehavioral function, and their 1-year-old infants have increased cortisol reactivity to stress. The heightened poststress cortisol persists even when adjusting for symptoms of postnatal maternal depression. The correlation between maternal inflammatory biomarkers and cortisol levels with infant stress response suggests a mechanistic link. However, the proposed causative biological pathways are supported only by correlational analyses.

The researchers concluded that: “Most importantly, antenatal depression is common and is associated with adverse obstetric outcomes, but is also readily diagnosed and treated, thus providing an opportunity for intervention, ultimately preventing the transmission of abnormal stress biology, and related psychopathology, to the next generation.” 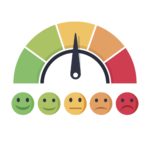 Affective Instability Is an Important Predictor of Major Depressive Disorder