Overall age is more strongly associated with negative mood and depressive symptoms than is menopausal status, according to a study conducted at the University of Melbourne, Australia and published in Menopause.

Katherine Campbell and colleagues examined the influence of reproductive as well as chronological aging on mood during and following the menopausal transition. The researchers used data from the Women’s Healthy Aging Project, an ongoing longitudinal epidemiological study of Australian women (n=438) between ages 45 and 55 years, that began in 1991. Annual assessments were conducted between 1991 and 1999. They subsequently (in 2002, 2004, and 2012) reassessed the original cohort using the same variables used during the original assessment, in addition to specific variables relevant to aging. Assessments remain ongoing, to date spanning 20 years of follow-up, with 11 time points of measurement.

Menopause status was categorized based on the Stages of Reproductive Aging Workshop (STRAW) +10 criteria and began with “late reproductive stage” (continuation of regular menses for >12 months), early menopause transition (changes in menstrual frequency), and 3 stages of late menopausal transition, followed by postmenopause. Women who had used hormone therapy and women who had undergone surgical menopause were categorized separately.

Negative mood was determined by the Affectomer 2, a 23-item scale assessing negative mood, positive mood, and well-being. The test was administered annually between 1992 and 1999, and then in 2002, 2004, and 2012. Depressive symptoms were determined by the 10-item Center for Epidemiologic Studies depression (CES-D) scale, which was administered in 2002, 2004, and 2012.

A comparison of mean scores between the stages of early and late postmenopause showed a decline in negative mood and depressive symptoms, but the difference was not present when the researchers controlled for age. The highest negative mood and depression symptoms were reported during the menopausal transition and the lowest in late postmenopause. Increasing age was associated with a reduction in depressive symptoms F(1,559)=14.83 (P <.001) and negative mood F(1,935)=14.97 (P <.001).

“The findings of this study suggest that women in the menopausal transition and early postmenopause are at higher risk of depressive symptoms and higher levels of negative mood than the late postmenopause,” the researchers commented, suggesting that this “may be due to a range of bio-psycho-social risk factors.” However, “the improvement in mood and reduction in depressive symptoms between mid-life and late-life was more strongly related to increasing age rather than reproductive stage,” they said. “Any examination of changes in mood across the menopausal transition must consider the overlap between reproductive and chronological aging.” 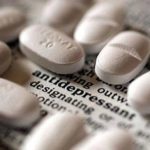