Variation in the neural processing of auditory stimulation was found to be related to psychosis and bipolar disorder, according to findings of a study published in The American Journal of Psychiatry.

A total of 3 of the 26 EEG variables tested best captured the group differences.

The first significant variate discriminated healthy participants from patients along psychopathology severity. The specific neural variables corresponding with these differences were parietal N200 (r, -0.50) and mid low-frequency (r, 0.48) responses during the target trial and N100 (r, -0.45) and early/mid low-frequency (r, 0.44) responses during the standard trial. In addition, these same features strongly correlated with cognitive function (r, 0.91).

The second significant variate discriminated between bipolar disorder with and without psychosis. The specific neural variables were event-related potential P50 (r, 0.31), beta (r, 0.34), and early gamma (r, 0.46) responses during the standard trial.

The third significant variate discriminated between healthy or nonaffective psychosis groups from bipolar disorder cohorts. The neural variables most associated with this variate were standard trial P200 (r, 0.57) and frontal P3a (r, 0.45) responses and event-related potential responses during the target trial (r, 0.40).

This study was limited by the imbalanced numbers of participants across cohorts and the fact that most patients were on medication during assessment.

These data suggest that there is variation in the neural processing of auditory stimulation. The study authors concluded that better understanding of the neurobiology of the psychosis-bipolar spectrum may identify viable biomarkers for therapeutic targets. 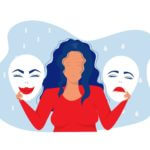