Borderline personality disorder (BPD) and bipolar disorder (BD) affect an estimated 1.6% and 2.6% of US adults, respectively; both illnesses are severe and associated with significant disability.1,2 They commonly co-occur and share certain symptoms, including impulsivity and emotional instability. Given these overlapping features, it can be challenging for clinicians to differentiate between the two disorders.

Results from some studies support the “bipolar spectrum hypothesis,” which posits that both BPD and BD reflect alternate expressions of the same underlying disorder.3-7 Proponents of this concept believe that BPD should be reclassified as part of the bipolar spectrum. Other research suggests that they are different disorders based on significant differences variations in the course of illness, family history, phenomenology, and response to treatment.

Determining whether BD and BPD “are 2 forms of the same disorder or 2 independent entities is important because the answer may help guide future investigation on the etiology and treatment of these clinical syndromes,” wrote the investigators in a study published in the Journal of Clinical Psychiatry.8 One way to approach this inquiry “is to investigate their latent structure, ie, whether the way their symptoms cluster is best explained by 1, 2, or possibly more latent variables.” If BP and BPD are different disorders, their symptoms would be expected to be manifestations of two or more such variables, and if they are the same disorder the symptoms should be manifestations of the same variable(s).

To explore this question, researchers from Columbia University in New York and Hospital Universitario de Alava-Santiago in Spain examined data from a nationally representative sample of US adults (n=34,653) from the National Epidemiologic Survey on Alcohol and Related Conditions (NESARC). Based on this information, they performed exploratory factor analysis (EFA) and confirmatory factor analysis (CFA) of 25 symptoms (9 symptoms of BPD, 9 symptoms of depression, and 7 symptoms of mania).

This study is the first of its kind to use these methods to explore the links between BPD and BD. Trained interviewers assessed participants for each disorder based on DSM-IV criteria.

The results demonstrate that a 3-factor model provided an excellent fit for the latent structure of BPD and BD symptoms in both the EFA (root mean square error of approximation [RMSEA] = 0.017, comparative fix index [CFI] = 0.997) and the CFA (RMSEA = 0.024, CFI = 0.993). Findings for each factor were as follows:

“The pattern of pairwise correlations between the 3 factors is consistent with the clinical presentation of 2 syndromes (depression and mania) that can be characterized as a unitary psychiatric entity (bipolar disorder) and a third syndrome (borderline personality disorder) that is often comorbid with bipolar disorder,” according to the paper. “The findings converge in suggesting that bipolar disorder and borderline personality disorder are overlapping but different pathologies,” and that increased severity in 1 dimension may increase the odds of experiencing symptoms in one of the other three dimensions.

These findings align with previous results that indicate shared genetic variance between BD and BPD, as well as shared environmental risk factors such as childhood parental loss, various types of early trauma, and a dysfunctional family environment. In future research, twin studies could possibly quantify the degree to which these factors overlap in the two disorders. The present results are also consistent with the observation that certain treatment strategies may be effective in both disorders.

The investigators note several study limitations. First, diagnostic criteria were based on self-report by participants and was not confirmed by other sources. The sample was also limited to community-dwelling adults, so the data do not apply to adolescents or special populations such as incarcerated individuals. In addition, the DSM-5 had not yet been released at the time the study was designed, so the diagnostic criteria were based on the DSM-IV.

“These findings may serve to inform ongoing efforts to refine the existing psychiatric nosology and to suggest new avenues for etiologic and treatment research,” they concluded. “Neuroimaging, genetic epidemiologic, and longitudinal studies may help provide complementary information on the relationship between” BPD and BD. 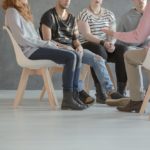 Benefits of Psychoeducation in Bipolar Disorder Mediated by Perceived Improvement