A recent Wall Street Journal headline touted, “Aging Baby Boomers Hold on to Drug Habits.”1 In the same article, Wilson Compton, deputy director of the National Institute for Drug Abuse explained, “As the baby boomers have aged and brought their habits with them into middle-age and now into older adult groups, we are seeing a marked increase in overdose deaths.”

Until now, most research and clinical data relative to substance abuse in the elderly focused on alcohol, prescription drugs (iatrogenic), nicotine and caffeine–related disorders.2 However, more recently, we are starting to see older patients brought to emergency rooms (ER) secondary to toxic effects of illicit drugs — in particular, cocaine, heroin, and marijuana.

A U.S. government study in 2008 of nearly 1 million ER visits for illicit drug use found only 6,000 — less than 1% — involved adults over the age of 65.3 A study published last year of positive alcohol and drug screens among elderly trauma patients brought to a level 1 trauma center found that of 1,302 patients older than 65 years of age, a positive urine drug screen was found in 48.3% of them.4 Another higher-risk population is the aging prison population where 31% of those older than 55 were found to have current problems with illicit drug use.5

Profile and Patterns of Illicit Substance Use

One should look for two patterns of illicit substance abuse in the elderly: early-onset and late-onset.

Early-onset are those older adults who started using illicit substances in early-life and have continued into late adulthood. This scenario is less likely to occur with earlier effective treatment and family support and more likely with criminal involvement, ongoing social pressure to use, continued availability of substances or co-morbid psychiatric disease.7

Late-onset defines adults who begin to use illicit substances in their senior years. 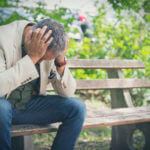