High rates of depression were observed in older adults during the year preceding death, according to study data published in the Journal of the American Geriatric Society. Depressive symptoms arising in the final year of life were greater among women, young adults, and nonwhite adults.

Elissa Kozlov, PhD, of Rutgers University in New Brunswick, New Jersey, led study efforts to identify the epidemiology and trajectory of depressive symptoms immediately prior to death. Data were abstracted from the Health and Retirement Study, a nationally representative panel study of older adults (ages >50 years) in the United States. Assessments, conducted biennially, captured sociodemographic and clinical characteristics through a battery of tests.

Depressive symptoms were assessed using the Center for Epidemiologic Studies Depression Scale (CESD-8). The analysis used data from respondents who died within 12 months of initial study interview. The mean CESD-8 score was compared across patient age groups over time before death. Analyses were adjusted for age, race, sex, net worth, educational attainment, self-reported illnesses, and activities of daily living limitations.

Impairment in activities of daily living and lung disease were associated with persistently elevated CESD-8 scores across the final year of life. By contrast, cancer was only associated with elevated levels of depression in the final month of life (P =.01).

These data underscore the significant burden of depression among older adults in the final year of life, with differential rates observed across gender, race/ethnicity, and clinical strata. As a study limitation, investigators noted that the survey did not collect CESD-8 data when a proxy respondent was used. As the number of proxy responders increased with greater proximity to death, the lack of CESD-8 data from these participants may have led to an underreporting of depressive symptoms.

“While depressive symptoms at the end of life are common, they are treatable and must be proactively addressed to reduce distress and ensure that everyone has the opportunity to experience a ‘good death,’ free of depressive symptoms,” the investigators concluded. 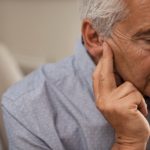 The Importance of Recognizing Hearing Impairment in Older Adults