HealthDay News — The impact of eating disorders in the United States was close to $400 billion for fiscal year 2018 to 2019 when considering both economic costs and reduced well-being, according to a study published online March 3 in the International Journal of Eating Disorders.

The researchers estimated total economic costs associated with eating disorders to be $64.7 billion in fiscal year 2018 to 2019, which was equivalent to $11,808 per affected individual. Thirty-five percent of the total costs were accounted for by “otherwise specified feeding or eating disorder,” followed by 30, 18, and 17 percent for binge eating disorder, bulimia nervosa, and anorexia nervosa, respectively. The eating disorder-associated reduction in well-being was estimated at $326.5 billion.

“Our study lays bare the devastating economic impact that eating disorders have in the United States, a country where the majority of people affected suffer alone and never receive appropriate treatment because of barriers to health care and lack of training for health care providers,” a coauthor said in a statement. 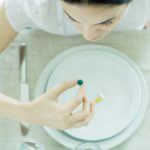