We aimed to characterize multiple psychotic experiences, each assessed on a spectrum of severity (ie, quantitatively), in a general population sample of adolescents. Over five thousand 16-year-old twins and their parents completed the newly devised Specific Psychotic Experiences Questionnaire (SPEQ); a subsample repeated it approximately 9 months later. SPEQ was investigated in terms of factor structure, intersubscale correlations, frequency of endorsement and reported distress, reliability and validity, associations with traits of anxiety, depression and personality, and sex differences.

As in adults at high risk for psychosis and with psychotic disorders, psychotic experiences in adolescents are characterized by multiple components. The study of psychotic experiences as distinct dimensional quantitative traits is likely to prove an important strategy for future research, and the SPEQ is a self- and parent-report questionnaire battery that embodies this approach. 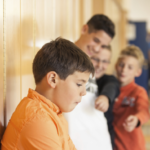 Bullying Ends in Childhood, But Mental Toll Continues in Adulthood