A systematic review and meta-analysis, published in JAMA Psychiatry, identified a relationship between problematic behavior among children and screen time.

Investigators at the University of Calgary in Canada searched publication databases through May 2021 for studies of screen time and behavioral impacts among children. A total of 87 studies comprising 159,425 participants were included.

Externalizing behaviors were evaluated in 80 publications and internalizing in 40.

In a moderator analysis, the investigators observed that externalizing problems increased with the proportion of boys in the study population (b, 0.007; P =.001). Stratified by specific behaviors, the correlation between screen time and aggression was higher (r, 0.17) than with attention-deficit/hyperactivity disorder (r, 0.09).

In addition, studies that controlled for baseline externalizing behavioral problems observed more weak correlations with screen time (r, 0.06) than studies with cross-sectional designs (r, 0.13) or those without a control group (r, 0.11).

For internalizing behaviors, screen time was also significantly, although weakly correlated (r, 0.07). Study heterogeneity was observed (I2, 85.27%; P <.001), however, smaller sample sizes were not associated with stronger effects.

The major limitation of these findings is that the level of the overall effect size is indicative of correlation and not causation.

The study authors concluded, “The association between screen time and children’s mental health has garnered marked attention from academic, health, and public sectors. This systematic review and meta-analysis found that screen time was weakly but significantly correlated with children’s internalizing and externalizing behaviors.”

Child Psychiatry Violence and Aggression
Next post in Child/Adolescent Psychiatry 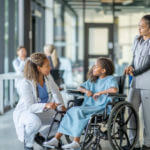