Current immigration policies of detention or deportation are linked to elevated risks for later suicidal ideation, alcohol use, and behavioral problems among Latino and Latina adolescents, according to a study published in JAMA Pediatrics.

Approximately 5.9 million children with US citizenship live with a family member who is undocumented, and federal policies since 2017 have expanded detentions and deportations. The American Academy of Pediatrics, the American Medical Association, and the Society for Research in Child Development have expressed concern about the potentially detrimental mental health effects these policies may have on adolescents.

Kathleen M. Roche, PhD, from the department of prevention and community health, Milken Institute School of Public Health, George Washington University, Washington, DC, and colleagues sought to determine the effect of current immigration policies on Latino and Latina adolescents. They collected survey data between February 14 and April 26, 2018, and September 17, 2018, and January 13, 2019, as well as at 6-month follow-up.

Overall, 136 respondents (24.9%) had a family member detained or deported in the prior year. Adolescents reporting detention or detainment of a family member experienced less parental support and more parent-child conflict. Deportation or detention of a family member was associated with a higher risk for suicidal ideation (27.9% vs 16.1%; adjusted odds ratio [aOR], 2.37), alcohol use (18.4% vs 7.3%; aOR, 2.98), and clinical externalizing behaviors (22.8% vs 11.4%; aOR, 2.76), such as aggression and rule breaking.

The study authors expressed concern that the consequences of these detentions and deportations may have a lasting effect on adolescents. They noted, “Because suicide, drug overdose, and alcohol abuse are key factors associated with the 2014 to 2017 decreases in US life expectancy, this study’s findings raise concerns that current immigration policies may be associated with midlife mortality.”

Study limitations included the lack of long-term data, the self-reported nature of the data, and the sample size, which limited the ability to differentiate the effects of detention as opposed to deportation.

The investigators noted that “disruptions to family resources and routines conferred by a family member’s detention or deportation may be associated with a continued decline in well-being with the passage of time.” They expressed concerns that their findings reveal “potential violations of public health principles” and worsen “existing health disparities.” 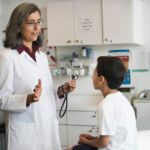