A new study from Yale University shows that bigger babies do have increased risk of autism, while smaller babies are more likely to develop schizophrenia. The size of babies and even human behavior may be shaped during early fetal development by a molecular tug of war between paternal and mat 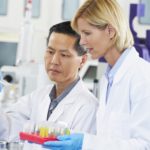