An animal-assisted stress management program substantially reduced stress among university students, according to data published in AERA Open. In a study conducted at Washington State University, students who completed a 4-week stress-prevention program that involved interacting with animals displayed significant improvements in executive functioning (EF) and metacognition. Improvements were maintained at a 6-week follow-up assessment.

Undergraduate students at the University of Washington were invited to enroll in a stress management program that involved educational seminars or human-animal interaction (HAI) or both.

Students completed a baseline survey that captured demographic characteristics, academic performance, and clinical and psychiatric history. A risk indicator was assigned to enrollees using survey responses. Participants were considered to be at risk for academic failure if they endorsed at least 1 of the following factors: former or present struggles maintaining a grade point average (GPA) above 2.0; having a diagnosis of a mental health condition or disorder; experiencing prior or current suicide ideation; and/or receiving classroom accommodation for learning disorders.

The primary outcome was improvement in executive functioning, captured at baseline and at postintervention (weeks 6 and 12) using the Behavior Rating Inventory of Executive Function-Adult (BRIEF-A). The Behavioral Regulation Index and Metacognition Index were also administered at these timepoints. Multiple linear regression was used to assess the impact of treatment condition and risk status on executive functioning scores.

Improvements associated with HAI appeared sustained at follow-up. At week 12, the HAI-O at-risk group continued to display higher EF (P =.028) and metacognition (P =.009) scores compared with the ASM condition. Baseline EF, baseline metacognition, and baseline emotional regulation were also substantial predictors of follow-up EF. Study condition did not appear to affect outcomes among students who were not at risk for academic failure. The at-risk HAI-E group did not have substantially different outcomes from the ASM group at any timepoint.

Results of this study support the therapeutic effects of HAI on stress levels and executive functioning. The effect was particularly pronounced among students who exclusively interacted with animals during the intervention condition. Participants in the ASM condition and participants who received a combination of stress management workshops and HAI did not have significant improvements in EF over time.

Further studies are needed to explore this trend; the present study is limited by the relatively small and homogenous cohort. Students who elected to participate in a study involving HAI may have been more likely than the general student population to derive benefits from animal interaction.

“[These] findings suggest that at-risk students experienced improved executive function after repeated exposure to petting dogs compared with at-risk students assigned to engage in…stress management lectures and activities,” the investigators wrote. “[T]he results of the current study provide evidence that interacting with therapy dogs and their handlers, but not exposure to formalized stress management content, improves EF for university students who have been classified at high risk for academic failure.”

Disclosure: This work was supported by a grant from the WALTHAM Human–Animal Interaction Collaborative Research Program, which is affiliated with Mars Petcare. Please see the original reference for a full list of disclosures. 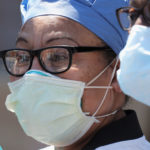