The efficacy of naltrexone in treating alcohol use disorder is increased in nicotine users, according to a randomized clinical trial follow-up report that confirmed researchers’ previous hypotheses regarding predictors of naltrexone effectiveness, as reported in Alcoholism: Clinical and Experimental Research. Smoking was found to be a better predictor of efficacy than the single nucleotide polymorphism (SNP) OPRM1 A118G, which was initially identified for this purpose.

There has been much variability in the capacity for pharmacological treatments to help curb alcoholism, and the research community has remained interested in determining specific factors that may predict the efficacy of treatments such as naltrexone.

While the SNP OPRM1 A118G has demonstrated some predictive value, results have been inconsistent, with some believing that smoking status could prove a stronger predictor of naltrexone response than the OPRM1 allele. However, this relationship had yet to be comprehensively evaluated. The fact that nicotine use is considerably higher in alcoholics compared with the general population also made smokers an ideal target for assessing naltrexone effectiveness.

The primary outcome in this study (clinicaltrials.gov Identifier: NCT00920829) was percent of heavy drinking days per month, with drinks per day and percent of days drinking serving as secondary outcomes.  Percent change in disialo carbohydrate-deficient transferrin (%dCDT), an independent biomarker of alcohol use, was used to confirm participants’ verbal reports of alcohol consumption patterns. In the original 16-week trial, 146 individuals (69.2% men) meeting Diagnostic and Statistical Manual of Mental Disorders, 4th Edition (DSM-IV) criteria for alcohol use disorder were randomized by SNP genotype as well as nicotine use and then assigned to either naltrexone 50 mg/d or placebo.

The investigators noted several study limitations, including the lack of initial stratification by nicotine use, unequal numbers of nicotine users and non-users, lack of further characterization of nicotine dependence level, and lack of daily nicotine use patient recordings or urine cotinine level confirmation.

These findings should serve as confirmation of earlier hypotheses that nicotine may indeed be a more useful predictor of naltrexone response in individuals with alcohol use disorder compared with genetic factors such as the OPRM1 SNP previously identified.

For clinicians, this may impact the choice of patients as candidates for naltrexone-aided alcohol intake reduction based on their status as nicotine users. 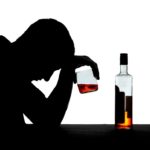 Drinkers Often Unsuccessful at Reducing Alcohol Use Despite Motivation