There are apps for everything these days, and healthcare is no exception. A recent study by Dr John Torous and colleagues found that there are more than 165,000 healthcare apps available, and although the exact number is uncertain, many of them are mental health apps.1 However, there are only a handful of published studies addressing the efficacy of mental health apps, and only 7 studies on apps for those suffering from schizophrenia.

Too much too soon?

There are indications that mental health apps may have their uses in healthcare provision. However, as pointed out by Dr Amy Hardy, creator of the SlowMo cognitive-behavioral therapy (CBT) app that helps patients slow down and analyze paranoid thoughts, safety and efficacy should be proven.2 Despite positive results in early trials, she is delaying the release of her app until conclusive results can be obtained.

Dr Torous agrees with this point of view: “We have very little clinical evidence about the utility of these apps in clinical practice and need more clinical research to understand how helpful they may be. There are many visions for what the future of apps for mental health can be, but it is important that we focus on what clinical data shows us is safe and effective.”

Apps in treatment: dangers and pitfalls

Dr Peter Yellowlees of the Department of Psychiatry and Behavioral Sciences, UC Davis Health System, Sacramento, warns that although apps can make care more patient-centered, they could prove dangerous if poor quality or inappropriate data is collected, since this could lead to poor clinical decisions.

As for apps that have not been thoroughly scrutinized and tested, Dr Torous points out that there are numerous potential pitfalls: “Poor quality apps may offer wrong medical advice, advise patients to undertake risky changes to their treatment plan, not protect patient privacy, make patients think they are getting appropriate care when they aren’t, and cause patients to avoid seeking actual care.”

Dr Steven Chan, also of UC Davis Health System, underlines the potential dangers of apps that may amount to ‘quackery’ and that are merely a means of providing information that is not subject to the same scrutiny as medication or therapy. “With apps, dangers tend not to be acute, immediate, or imminent,” he warns.

Despite these concerns, Drs Torous and Yellowlees believe that scientifically developed mental health apps will play an important role in the future. “Real-time monitoring would offer the potential to bring the patient perspective into clinical appointments and ensure that all patient experiences and symptoms are recorded and represented. These same apps also offer the potential to deliver real-time interventions, be it simple medication reminders to video check-ins with clinicians, helpful lifestyle tips and automated therapy programs,” says Dr Torous.

Although apps will not be able to replace therapy, they could prove particularly useful to providers in monitoring patients with psychosis or schizophrenia, says Dr Yellowlees. For example, they could be used by patients to record mood and the presence or absence of hallucinations, information that can help psychiatrists to provide better treatment.

Commenting on Dr Hardy’s CBT app concept, Dr Torous observes that apps could prove useful in offering CBT-based interventions. “There is increasing evidence that CBT is effective for schizophrenia. Offering CBT via a smartphone for schizophrenia has exciting potential given how many people it can reach.”

Diane Lanigan, Chief Operating Offer of CCBT UK, an organization striving for Computer-aided Cognitive Behavioral Therapy (CCBT), refers to a study on internet CBT published in the Journal of the World Psychiatric Association:3 “Results showed that guided internet CBT and face-to-face treatment produce equivalent overall effects. Internet guided CBT does help improve outcomes in severe depression and anxiety. It is not suitable for everyone, but it can really help individuals with mild to moderate mental health conditions. C CBT is only a tool, but if you can show a user that they can use this tool to make themselves better, this is very empowering for the patient.”

Indeed, Dr Yellowlees believes that apps can contribute significantly to treatment when they are developed and used correctly. Apart from helping doctors to monitor patient symptoms, they can also help to improve medication adherence by sending reminders. They could even be linked to electronic medication containers or be used in conjunction with medications with built in electronic trackers that would be activated when coming into contact with stomach acid.

With increasing numbers of mental health apps for everything from schizophrenia to anxiety and depression, patients often take them to therapy for an opinion. “It’s like the Wild West out there –anyone can produce an app and sell it, but who is policing the content?” asks Lanigan. She calls for randomized control trials (RCTs) as the Gold Standard in evaluating any medical intervention. Even professional bodies have erred in evaluating mental health apps and Lanigan observes, “The future of mental health apps will be dependent on regulation in the future.”

In their study, Dr Torous and colleagues outlined the parameters that should be used in evaluating mental health apps. The data collected must be actionable and clinically useful, secure, and developed in accordance with legal and ethical professional standards. They also warn that apps that are not evidence-based could be risky, and observe that insufficient transparency regarding the way data is handled and processed creates uncertainty regarding the value of an app’s conclusions or recommendations. Even if all these criteria are met, features that can be used by clinicians and patients to customize the way the app works will increase its relevance and usefulness.

Patient engagement is a huge challenge when it comes to mental health apps. According to Dr Torous, “Many people may download an app, but using an app consistently is difficult and many apps suffer from poor rates of engagement. We need more research to understand why people download these apps in the first place and why they stop using them so shortly after.”

Dr Chan cites the example of a PTSD app: “A recent study of the PTSD Coach app showed that over 80% of the users stopped using the app after half a year. This is actually fairly good for a self-care app, but does underscore the current need for in-person and human outreach.” He notes that real scientific evidence in favor of apps in mental health remains a challenge: “Initial studies show that apps have the promise to help with severe illness, but those are largely in research settings. To my knowledge, there are no large-scale studies for severely mentally ill populations.”

If an app can fulfil the criteria put forward by Dr Torous and associates, the potential benefits could be enormous. First among these is the sheer number of people that could be reached. Patients would have access to a 24/7 “pocket therapist” that would help them to apply therapeutic principles between consultations, and the data gathered could prove invaluable to clinicians. Indeed, effective apps could also take some of the burden off healthcare providers facing increasing mental healthcare demands.

Dr Chan notes that apps could bring help to those who don’t have any access to a psychiatrist, but do have a smartphone. In particular, they can provide some level of care to those who may not otherwise get it, such as those in developing countries. They could also facilitate telemedicine interactions in which patients are able to consult a real psychiatrist remotely. “Apps have great potential to change the way we diagnose and treat illness. Right now, much of the way we diagnose illness relies on subjective accounts, but what if we could more accurately quantify behavioral patterns with apps that track social patterns, movement and activity changes, and light exposure?” adds Dr Chan.

1. Torous, J.B., Chan, S.R., Yellowlees, P.M., and Boland, R. (2016). To use or not? Evaluating ASPECTS of smartphone apps and mobile technology for clinical care in psychiatry. Journal of Clinical Psychiatry 77:0. 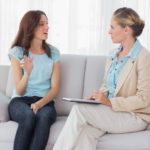 CBT in Individuals With Rheumatoid Arthritis for Managing Chronic Pain