SAN ANTONIO — We have all heard the old adage “laughter is the best medicine,” but can laughter also be leveraged to alleviate chronic pain?

According to Jay Sandweiss, DO, from Ann Arbor, Michigan, it can. During the American Academy of Pain Management’s Annual Meeting, Dr Sandweiss presented literature-based evidence supporting this notion, while also making the audience laugh, using quotes from Groucho Marx to Mark Twain.1

Considerable evidence in the literature supports the benefits of laughter, starting with a study conducted in India in 2009, “Laugh yourself into a healthier person: a cross-cultural analysis of the effects of varying levels of laughter on health,” in which the relationship between laughter and disease prevalence was analyzed in 730 people (366 from India and 364 from Canada) between the ages of 18 and 39.2

The researchers sought to quantify the level of laughter that had an effect on health and on the quality of life. In Canada, laughter was linked with emotional well-being; whereas it was tied to life satisfaction in India.

Dr Sandweiss suggested his audience of clinicians ask their patients whether they laugh and how often, and encourage them to add laughter to their life. He continued by pointing out that laughing about 10 minutes every day has similar benefits on health as eating vegetables, exercising, and meditating. There are now movements of “laughter medicine” in various countries.

The study of laughter, known as gelotology, has endeavored to elucidate the pathways involved in this reaction: a single center located in the dorsal upper pons that controls 2 pathways, a voluntary and an involuntary, emotionally driven pathway.

The voluntary pathway starts at the premotor opercular areas and involves the motor cortex and pyramidal tract. The amygdala, dorsal brainstem, thalamic, hypothalamic, and subthalamic areas are all part of the involuntary pathway.

In addition, laughter gives a “powerful form of exercise that provides more of a cardiovascular workout than many regular aerobic activities.” During the arousal phase of laughter, the heart rate speeds up, and returns to its resting state during the resolution phase.

A study conducted at the University of Maryland demonstrated that laughter was beneficial to the cardiovascular system, by reducing the breakdown of nitric oxide, thus promoting vasodilation, known to be reduced by stress.3 In particular, authors found that blood flow was increased by 22% during laughter, and that conversely, stress decreased it by 35%.

In a 2010 literature review titled “The therapeutic value of laughter in medicine,” Ramon Mora-Ripoll, MD, PhD, of Organización Mundial de la Risa in Barcelona, Spain, sought to “identify, critically evaluate, and summarize the laughter literature across a number of fields related to medicine and health care to assess to what extent laughter health-related benefits are currently supported by empirical evidence.”4

From this review, the authors concluded that laughter provides numerous quantifiable benefits by improving one’s physiology, psychology, and general quality of life, thus positing laughter as a valuable complementary medicine option for both disease prevention and treatment.

The aforementioned review found evidence of health-benefiting effects of laughter that spanned many fields of medicine, from psychiatry and oncology to palliative care and rehabilitation. The physiological benefits of laughter are numerous, and include muscle relaxation, improved respiration and enhancement of immune system defenses, mental functioning and pain tolerance.

Dr Sandweiss proposed the audience ways to get more laughter in life, from going to a comedy club, to playing with a pet. In particular, as starting points, he suggested smiling, spending time with fun people, and bringing humor into conversations. 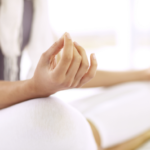