Glucocorticoid therapy may put patients at an increased risk of developing psychotic disorders, according to a study published in Schizophrenia Research. The risk may also be linked to the underlying disease for which glucocorticoids are prescribed.

This population-based cohort study obtained data from various Danish socio-demographic and medical registries, which include the entire 5.5 million inhabitants of Denmark. The study focused on individuals born between January 1, 1995 and December 31, 2003 (a total of 597,257 individuals), separating them into a group exposed to glucocorticoids and a non-exposed group. January 1, 1995 was chosen as a start date, as this was when complete medication data were first made available through the Danish National Prescription Database. For sensitivity analyses, an older cohort of individuals born between January 1, 1985 and December 31, 2003 was also included.

The findings could have been confounded by the presence of asthma, which other studies have demonstrated to be associated with higher rates of schizophrenia, although study investigators did attempt to counter this potential confounding with an active comparator group exposed to leukotriene receptor antagonists or beta 2-agonists.

Study investigators concluded that exposure to glucocorticoids may be associated with an increased risk for any schizophrenia spectrum disorder among children and adolescents, including schizophrenia and acute psychosis.

The general risk increase was observed for all diagnoses independent of dose, indicating an underlying association with the physical disease, such as asthma, with the development of psychotic disorders. 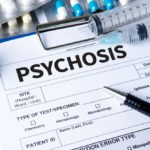