An intense culture of performance and achievement, coupled with ever-growing expectations is causing distress — if not mental illness — in medical students, says the Dean of Education at Icahn School of Medicine.

At two town hall meetings held at the school 48 hours after Kathryn’s suicide, students expressed their rage at the inadequate mental-health support that they felt they were receiving, and their feelings that their struggles with depression, anxiety and suicidal ideation were being ignored.

“All of us — students, medical educators, the Association of American Medical Colleges — will have to band together if we want to change this culture. I believe it is imperative that we do so before another precious life is lost,” he advises.

Indeed, Kathryn’s suicide led to the formation of a task force at Icahn School of Medicine, Dr Muller writes. While the team is working to address important gaps in handling student mental-health and well-being issues, Dr Muller warns that such measures will be unsuccessful in improving students’ mental health if how performance and achievement are measured at the school is not also changed.

“We must minimize the importance of MCAT scores and grade-point averages in admissions, pull out of school ranking systems that are neither valid nor holistic, stop pretending that high scores on standardized exams can be equated with clinical or scientific excellence, and take other bold steps to relieve the pressure we know is contributing at least to distress – if not mental illness – among our students,” argues Dr Muller. 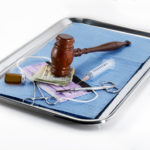