Sleep problems in youth with major depressive disorder (MDD) decreased after undergoing psychological treatments for depression, according to results published in the Journal of Affective Disorders.

Investigators used data from the Improving Mood through Psychoanalytic and Cognitive-Behavioral Therapy study to identify 465 youth aged 12 to 18 years (75% were girls or women) who met diagnostic criteria for MDD based on the Kiddie-Schedule for Affective Disorders and Schizophrenia. Patients were randomly assigned to one of the following psychological treatments for their MDD: Short-Term Psychoanalytic Psychotherapy, Cognitive Behavioral Therapy, and Brief Psychosocial Intervention. Sleep difficulties were assessed at baseline, post-treatment (36 weeks), and follow-up at 86 weeks using the Kiddie-Schedule for Affective Disorders and Schizophrenia and the Mood and Feelings Questionnaire, with emphasis on the responses concerning insomnia and hypersomnia.

There was a significant decrease in sleep difficulties between baseline and post-treatment (91.8% vs 55.6%) and baseline and follow-up (91.8% vs 47.2%), but not between 36 and 86 weeks. The primary sleep complaints of nonrestorative sleep and initial insomnia were associated with significant decreases from baseline to follow-up (68.0% vs 18.0% and 53.3% vs 20.9%, respectively). Hypersomnia was not commonly reported and was not associated with significant change during the study. Sleep quality ratings did not significantly differ by treatment modality. Despite the reduction in frequency of sleep problems and remission of MDD in 33% end of treatment, approximately half the cohort reported residual sleep difficulties at follow-up.

The study was limited by the self-reported nature of sleep quality, which could have been further impacted by the negative cognitive bias associated with depression. 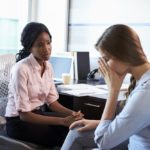