I. What every physician needs to know.

Syphilis, caused by the bacterium Treponema pallidum, is primarily transmitted through sexual contact and is often known as “the great imitator” because it can manifest itself in so many different ways. It is important to accurately classify this disease into early (within first year after acquisition of infection) or late (more than a year after transmission) syphilis as it impacts risk of transmission and duration of treatment. Stages of this disease are primary, secondary, latent and tertiary. Syphilis is a reportable disease. In 2008, health officials reported over 117,000 cases of syphilis; almost 19,999 cases of primary and secondary syphilis have been documented in 2014. Over half of these cases were reported from only 70 counties in the United States and occurred predominantly in men who have sex with men, between 20 and 29 years of age. The incidence of syphilis has increased among women also, which is of particular concern as that heralds a rise in congenital syphilis. Between 2013-2014, the number of syphilis cases increased by 15.1%.

T. pallidum is transmitted by contact of infectious lesions with small breaks in the skin. Incubation period is about 10-60 days.

II. Diagnostic Confirmation: Are you sure your patient has syphilis?

The diagnosis of syphilis depends on clinical findings, examination of lesions for treponemes and/or serologic tests. Dark field microscopy is the main diagnostic method for diagnosing primary syphilis.

A. History Part I: Pattern Recognition:

Syphilis had been considered a historic disease with peak incidence in the 1940s. After the penicillin era, it had all but vanished until the late 1980s, early 1990s when there was a peak in incidence that correlated with recognition of HIV as a risk factor. Increased incidence since 2001 has primarily been attributed to increased cases among men with ratio of male to female of more than 11:1. Men who have sex with men (MSM) account for over 60% of all cases of primary and secondary syphilis in the United States.

E. What diagnostic tests should be performed?

Other STD screening including HIV testing is recommended.

1. What laboratory studies (if any) should be ordered to help establish the diagnosis? How should the results be interpreted?

T. pallidum cannot be cultured; detection or serologic methods are used for diagnosis. Dark field microscopy and direct fluorescent antibody testing are used for the microscopic examination of specimen from the lesion looking for spirochete. Serologic testing can be divided into non-treponemal and treponemal tests.

Non-treponemal tests, rapid plasma reagin (RPR) and Venereal Disease Research Laboratory (VDRL), check for antibodies to cardiolipin-lecithin-cholesterol antigen. These tests are often used for screening because they are easy to perform; however, there is a higher risk of false positive because they can be falsely positive in the setting of other infections, immunization, or autoimmune disease. A reactive non-treponemal test must be confirmed with a treponemal test. RPR and VDRL are particularly useful as titers can be followed to determine responsiveness to treatment.

In neurosyphilis, a lumbar puncture should be performed; typical findings are pleocytosis, elevated protein, and VDRL positivity.

2. What imaging studies (if any) should be ordered to help establish the diagnosis? How should the results be interpreted?

Other than direct microscopy, there is no imaging for syphilis.

F. Over-utilized or “wasted” diagnostic tests associated with this diagnosis.

Beginning the work-up with non-treponemal tests seems to be more cost-effective than a treponemal-test first algorithm.

There are no treatments that need to be initiated within hours; it is acceptable to wait for confirmatory testing.

C. Laboratory Tests to Monitor Response To, and Adjustments in, Management.

In general, syphilis is treated with a one time dose of penicillin. Tertiary syphilis or neurosyphilis should be followed by infectious disease providers and possibly neurology or ophthalmology depending on symptoms.

Patients should be informed of Jarisch-Herxheimer reaction, an acute febrile reaction frequently accompanied by headache, myalgia and other symptoms that usually occur within the first 24 hours after therapy for early syphilis.

No change in management

Doxycycline and tetracycline should be avoided in patients with liver insufficiency.

E. Diabetes or other Endocrine issues

Compared with HIV-negative patients, HIV-positive patients with early syphilis may be at increased risk for developing neurosyphilis and some studies have suggested evaluation with lumbar puncture in that population in the presence of serum RPR ≥ 1:32 or a CD4 count <350 cells/mm3. No treatment regimen for syphilis has been demonstrated as being more effective. HIV-infected persons should be evaluated clinically and serologically for treatment failure at 3, 6, 9, 12, and 24 months after therapy and lumbar puncture should be performed in case of treatment failure.

I. Gastrointestinal or Nutrition Issues

A. Sign-out considerations While Hospitalized.

B. Anticipated Length of Stay.

Once diagnosed, therapy and follow-up can be achieved as an outpatient.

1. When should clinic follow up be arranged and with whom.

2. What tests should be conducted prior to discharge to enable best clinic first visit.

Baseline complete blood count (CBC) with differential and renal function if the patient will be discharged on penicillin.

3. What tests should be ordered as an outpatient prior to, or on the day of, the clinic visit.

For long-term administration of penicillin, CBC and renal function should be followed.

Patients should be counseled on safe sex practices as well as signs and symptoms of partially treated/latent infection.

A. Core Indicator Standards and Documentation.

Syphilis is a reportable disease. 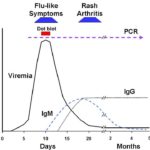