Nevus of Ota usually presents between birth and 12 years of age as an area of macular blue-grey pigmentation. Lesions range in size from a few cm in diameter to lesions which can cover more than half of the face. It is usually seen unilaterally on the face overlying the distribution of the ophthalmic and maxillary branches of the trigeminal nerve (Figure 1). Pigment is also seen in the ipsilateral sclera in approximately 2/3 of cases. Pigmentation has been reportedly seen bilaterally in 5-13% of cases, and can also involve the skin of the eyelids. Approximately 60% of cases occur within the first year of life and the other 40% occur at puberty. Most lesions persist into adulthood, after slowly growing throughout childhood. 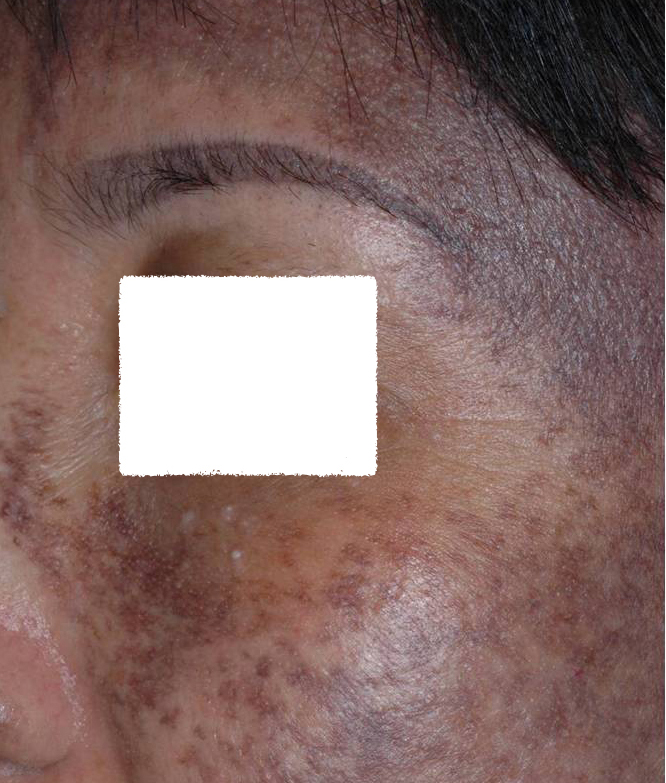 The differential diagnosis is much broader for those lesions of nevus of Ota that do not involve the sclera. In those cases presenting at birth, the lesion could be confused with a giant lentigo or a congenital melanocytic nevus. For lesions presenting at an older age, the differential diagnosis would have to be expanded to include postinflammatory hyperpigmentation as well as a fixed drug eruption. Once scleral pigmentation is noted, the differential is limited to nevus of Ota with or without malignant transformation, or with or without an associated syndrome. Associated syndromes include Sturge-Weber, Klippel-Trenaunay and Phakomatosis Pigmentovascularis.

Nevus of Ota is most commonly seen in those individuals of Asian descent. It was noted in 0.4-0.8% of all Japanese dermatology patients. Eighty percent of reported cases have been seen in women; however, it is not clear if this represents a real demographic difference, or simply the fact that it is more common for women to present for evaluation of a cosmetically concerning skin lesion.

Just as is the case with dermal melanocytosis, nevus of Ota is the result of failed migration of melanocytes from the neural crest to their normal location in the basal layer of the epidermis.

Glaucoma can be seen in up to 10% of patients with nevus of Ota with scleral involvement. Additionally 10 cases of melanoma have been reported in lesions of nevus of Ota, affecting both the involved skin as well as the involved eye.

Treatment options for nevus of Ota include cosmetic therapies to cover up the lesion versus destructive therapies. Distructive modalities that have been tried with varying degrees of success and side effects include cryotherapy, dermabrasion, and electrodessication, all of which can leave scarring and hypopigmentation. One trial reported good to excellent outcomes in 22 of 24 patients treated with combined dermabrasion and carbon dioxide cryotherapy. Additionally, both chemical peels and laser treatments have been reported to be effective in lightening these lesions. Several lasers have been used to treat lesions of nevus of Ota. These include the Q-switched ruby, the Q-switched ND:YAG and the Q-switched alexandrite lasers.

The therapeutic ladder for nevus of Ota is determined based on the size and extent of pigmentation of each given lesion. For smaller more lightly pigmented lesions, simple cosmetic cover-ups may be very effective. For larger darker lesions, combined dermabrasion with carbon dioxide cryotherapy was shown to produce good to excellent outcomes in more than 90% of patients. If that combination therapy is not available, multiple different lasers have been shown to be effective, with the data strongest in favor of the Q-switched alexandrite laser.

In addition to the cosmetic therapies described above, patients with a nevus of Ota require follow-up by both a dermatologist and an ophthalmologist, since cases of both cutaneous melanoma and ocular melanoma have been reported in those two-thirds patients with scleral involvement. Yearly examinationss should be performed by both subspecialists, with any nodular cutaneous lesion being biopsied. Ocular pressures should be checked regularly as well to assess for glaucoma .

There are two main unusual clinical scenarios to keep in mind while following patients with nevus of Ota. The first and most important involves the rare incidence of malignant melanoma arising either in the areas of skin pigmentation or scleral pigmentation, as both have been reported. The other broader issue is the association of nevus of Ota with other syndromes, such as Sturge- Weber, Klippel Trenaunay, and phakomatosis pigmentovascularis. These syndromes must be kept in mind, and if present, appropriately followed by the dermatologist and other relevant specialists in ophthalmology, neurology, and orthopedic surgery.

Patel , BC, Egan , CA, Lucius , RW. “Cutaneous malignant melanoma and oculoderma melanocytosis (Nevus of Ota): report of a case and review of the literature”. J Am Acad Dermatol . vol. 38. 1998. pp. 862(A case report and review of several cases of melanoma, including cases of ocular melanoma, seen in association with nevus of Ota, also known as oculoderma melanocytosis.)

Hata , Y, Matsuka , K, Ito , O. “Treatment of nevus of Ota: combined skin abrasion and carbon dioxide snow method”. Plast Reconstr Surg. vol. 97. 1996. pp. 544(An interesting review of a novel treatment for nevus of Ota. This treatment showed good to excellent cosmetic outcomes in 90% of patients who were treated with the combination of dermabrasion and carbon dioxide cryotherapy.)