The patient is born with symmetric skin folds. The child may or may not also present with various other congenital anomalies. Some cases will have an autosomal dominant inheritance. 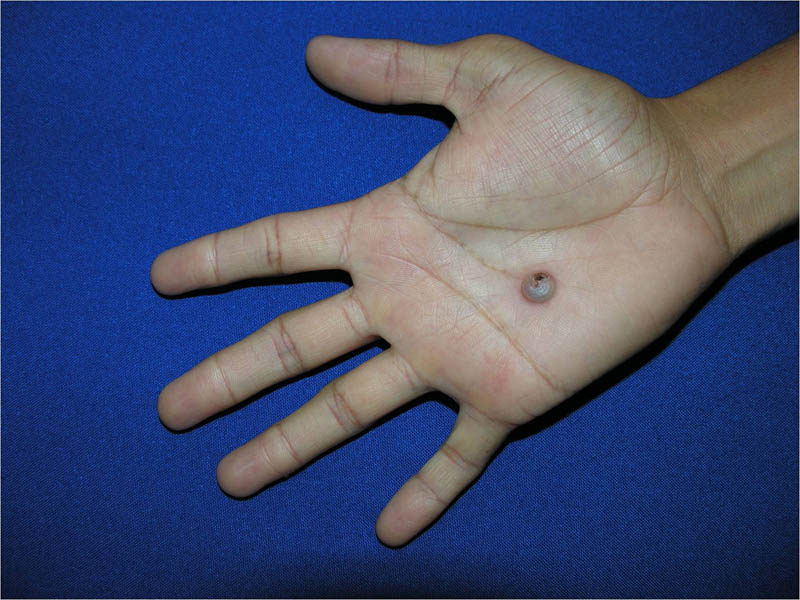 There have been reports of the skin folds resolving as patients grow into adulthood. However, in most case reports long term follow up is not provided.

Testing can reveal a normal karyotype. However genetic abnormalities including deletion of chromosome 11 and paracentric inversions of the long arm of chromosome 7 have been reported. Serologic tests are not of diagnostic value.

Children born with asymmetric skin folds with or without amputated extremities are more likely to be diagnosed with amniotic band sequence.

MTBS is a rarely reported congenital condition. Both autosomal dominant inheritance and sporadic cases have been reported. There are no known risk factors.

The etiology and pathophysiology of MTBS are unknown. Given the varying associated clinical features and the different underlying histologic findings, it seems likely that MTBS is simply a phenotypic description of several similar but distinct and incompletely defined conditions.

Skin folds may be the only finding noted on examination. Other patients may have abnormalities including craniofacial anomalies (low set ears, abnormal helices and pinnae, wide nasal bridge, cleft palate), seizures, mental retardation, esotropia, hemiplegia, thickened epiglottis or congenital heart defects. Any patient with supected associated findings should be managed with a multidisciplinary team approach. Consultation with a geneticist should also be considered.

There are no treatments for the skin folds of MTBS. There have been reports of spontaneous resolution of the skin findings in adulthood. Associated abnormalities should be treated by the appropriate medical specialists.

The most important aspect of treating MTBS is to determine if there are any associated anomalies that need to be addressed. No treatment is warranted for the skin folds themselves.

Management includes thorough evaluation for associated findings followed by appropriate referrals (eg, neurologist, ophthalmologist, cardiologist, plastic surgeon, otolaryngologist), after which management consists mainly of reassurance and observation. As there have been several reports of familial MTBS, a referral to a geneticist should be considered.

The multiple associated congenital abnormalities described in the section on systemic implications and complications must be ruled out during the initial evaluation of the patient.

Ross, CM. “Generalized folded skin with an underlying lipomatous nevus. “The Michelin Tire baby.””. Arch Dermatol. vol. 100. 1969. pp. 320-3. (Ross provides the first published description of MTBS findings. This sentinel case describes a female child with generalized folding of the skin on the scalp, face, limbs, back and buttocks. Additionally the left arm and leg were described as thicker than the right and the nose was squat and broad with a transverse furrow. Histologic findings were described as “characteristic of a nevus lipomatosus diffusa.”)

Nomura, Y, Ota, M, Tochimaru, H. “Self-healing generalized skin creases: Michelin tire baby syndrome”. J Am Acad Dermatol. vol. 63. 2010. pp. 1110-1. (The authors describe the case of a female with multiple ring-shaped folds on her neck, trunk, and extremities seen at their institution while she was an infant. Twenty-four years later she presented to the same hospital, this time with her 4-month-old son who had similar skin findings (and a normal skin biopsy). The mother’s skin creases had mostly resolved as an adult. Interestingly, her father and paternal grandmother reported a history of similar skin findings in infancy. This article supports the notion that some cases of MTBS can be inherited in an autosomal dominant fashion and that the skin findings can decrease significantly in adulthood.)

Gardner, EW, Miller, HM, Lowney, ED. “Folded skin associated with underlying nevus lipomatosus”. Arch Dermatol. vol. 115. 1979. pp. 978-9. (This report was similar to Ross’ original report in that there were findings of an underlying nevus lipomatosus. However this child also was found to have microcephaly, low set ears, esotropia, rocker bottom feet, and metatarsus abductus. The authors also reported an abnormal deletion of chromosome 11 in the child’s karyotype. This report is an example of the broad range of associated findings that have been reported with MTBS.)

Samarin, FM, Baum, ED, Antaya, RJ. “A case of Michelin tire baby Syndrome with a thickened epiglottis”. Pediatr Dermatol. vol. 27. 2010. pp. 79-81. The authors report the case of a 14-month-old male who presented with multiple circumferential skin folds since birth. Additional findings included a broad nasal root, low set ears, abnormal pinnae and a diffusely thickened yet uninflamed epiglottis. The authors hypothesize that a common embryologic developmental abnormality of the epiglottis and pinnae (both cartilaginous structures and both derived from the branchial arches) may explain the associated abnormalities found in this case of MTBS.)

Kharfi, M, Zaraa, I, Chaouechi, S. “Michelin tire syndrome: a report of two siblings”. Pediatr Dermatol. vol. 22. 2005. pp. 245-9. (This report describes a brother and sister both with skin folds on the upper and lower extremities along with associated craniofacial anomalies. The boy was noted to have been born with a history of first-degree parental consanguinity. His karyotype was reported as normal. A biopsy from the boy’s lower extremity revealed findings consistent with smooth muscle hamartoma. This case provides one example of the different histologic findings that have been reported in MTBS.)

Wiedemann, HR. “Multiple benign circumferential skin creases on limbs – a congenital anomaly existing from the beginning of mankind”. Am J Med Genet. vol. 28. 1987. pp. 225-6. (This brief letter mentions and provides a clinical photograph of a young infant with multiple circumferential skin creases who was also noted to have a congential heart defect. Further description of the heart defect was not provided. The author also notes that he has found these skin findings to be a “transient congenital phenomenon.”)

Sato, M, Ishikawa, O, Miyachi, Y. “Michelin tire syndrome: a congenital disorder of elastic fibre formation?”. Br J Dermatol. vol. 136. 1997. pp. 583-6. (The authors describe the case of a girl born with deep skin creases of the extremities and hypertrichosis of the arms, legs, shoulders and buttocks. Associated findings included esotropia, low set ears and wide nasal bridge. Histologic examination revealed numerous bundles of smooth muscle in the dermis surrounded by fragmented elastic fibers. Electron microscopy was performed which demonstrated “abnormal structure” of the elastic fibers. The authors hypothesize that abnormal elastic fibers contribute to the phenotypic skin findings in MTBS. This finding has not been reported in other cases of MTBS.)