Well-demarcated, pink to slightly hyperpigmented macule with superficial scale, usually less than 1cm, on sun-damaged skin, most common on the head and extremities. Solitary lesions are more common but cases of multiple lesions have been reported.

Uniformly large keratinocytes (both nuclei and cytoplasm), roughly twice the size of cells of normal neighboring uninvolved epidermis, hypergranulosis, and hyperorthokeratosis. There is hyperpigmentation of the basal layer with slight increased number of melanocytes. No cellular atypia or dyskeratotic cells are seen. Mitoses, if present, are restricted to the basal layer. A mild inflammatory infiltrate may be seen in the dermis (Figure 2, Figure 3). DNA analysis shows that the nuclei of the enlarged keratinocytes are hyperploid.

More common in women and the elderly. Lesions are likely to develop in photodamaged skin.

LCA is an epidermal neoplasm, which may possibly be related to lentigo senilis.

Unknown. Multiple strains of human papillomavirus (HPV) have been identified as a cofactor in the pathogenesis. There is a definite epidemiologic association with chronic photodamage.

There are no systemic disorders associated with LCA. Further workup is not required.

LCA is considered a benign lesion. Treatment of the remaining lesion after biopsy consists of cryotherapy with liquid nitrogen and may be initiated for cosmetic purposes. No therapy is another option.

A definitive diagnosis of LCA will likely require pathologic evaluation. Therefore, if the entire lesion is biopsied, further treatment will not be required.

Should portions of the lesion remain, cryotherapy is a non-invasive treatment modality that is easily employed. Lesions treated with cryotherapy usually resolve within a week. Side effects of cryotherapy may include a scar, hypo- or hyperpigmentation.

Alternative treatment includes a shave excision. Pathologic evaluation of the excised lesion can determine whether the lesion has been completely removed. Excision will result in a scar.

Observation without treatment is also an option, as LCAs are not premalignant or malignant lesions.

LCA tends to develop in actinic damaged skin. Therefore, a patient who has an LCA is likely to be at risk for other conditions known to develop in areas of actinic damage including actinic keratoses and skin cancer. Patients should have regular full body skin examinations by a dermatologist and should be counseled on photoprotection and the use of sunscreen.

Although LCA is considered to be a lesion of benign biologic behavior, a case of LCA of the conjunctiva that recurred twice following surgical excision has been reported. The second recurrence was found to be a carcinoma in situ.

Berger, T, Stockfleth, E, Meyer, T, Kiesewetter, F, Funk, JO. “Multiple disseminated large-cell acanthomas of the skin associated with human papillomavirus type 6”. J Am Acad Dermatol. vol. 53. 2005. pp. 335-7. (This article describes a patient with multiple nodules on the skin of the upper limbs histologically diagnosed as LCAs. HPV-6 was present in these lesions and should be considered a cofactor in LCA pathogenesis.)

Ghazi, NG, Patel, BS, Olsakovsky, LA, White, K, Patterson, JW, Carter, B. “A conjunctival lesion with histological features similar to large-cell acanthoma of the skin”. J Cut Pathol. vol. 37. 2010. pp. 1103-6. (This article describes the first occurrence of LCA in the conjunctiva. This lesion recurred following initial excision and later recurred as a carcinoma in situ upon second excision, suggesting LCA may have the potential for malignant transformation.)

Pinkus, H. “Epidermal mosaic in benign and precancerous neoplasia (with special reference to large-cell acanthomas)”. Hifuko Kiyo. vol. 65. 1970. pp. 75-81. (Pinkus discusses the possibility that the epidermis is a mosaic, that is, that adjacent keratinocytes could have different biologic behavior. He cites actinic keratosis as a malignant example of epidermal mosaicism and LCA as a benign example. He gives the first description of the LCA as having keratinocytes roughly twice the size of neighboring epidermal cells.)

Sanchez Yus, E, del Rio, E, Requena, L. “Large-cell acanthoma is a distinctive condition”. Am J Dermatopathol. vol. 14. 1992. pp. 140-7. (Forty-four biopsy specimens of LCA from 35 patients were studied. Histologically, 41 of the specimens could be classified into three patterns: basic, verrucous, and flat-hyperkeratotic. It was concluded that LCA is a distinctive condition with various stages of development and is probably related to stucco keratosis. It can clearly be separated histologically from solar lentigo and from solar keratosis. As other epidermal tumors, LCA can sometimes exhibit features of Bowen's disease.)

Weinstock, MA. “Large-cell acanthoma”. Am J Dermatopathol. vol. 14. 1992. pp. 133-4. (This article states that LCA is histologically distinguishable from a solar lentigo and that the biologically distinctive characteristic of LCA may be that it is a benign proliferation of a clone of tetraploid keratinocytes. Maintaining it as a separate diagnostic entity is justified.) 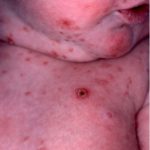