-Hyperpigmentation of the face

Xeroderma pigmentosum: BCCs may occur during the whole life period but not always as multiple lesions; other cutaneous malignancies such as squamous cell carcinoma and malignant melonoma may also occur. Photosensitivity, ephelids, lentiginosis and extracutaneous manifestations (eg, eye, neurologic involvement) are other findings of xeroderma pigmentosum.

Other family members of the patients are at risk for developing the disease. Phenotype is variable within an affected family, and all family members should be examined.

Basex-Dupré-Christol syndrome is a genetic disorder with X-dominant inheritance. The gene defect is on Xq24-27.1.

There is no specific treatment for the syndrome itself. The choice of treatment for BCCs depends on the number of lesions, their site, and individual characteristics. Local destructive procedures, surgical excisions (including Mohs surgery), photodynamic therapy, and medical treatments such as imiquimod may all be appropriate. Photodynamic therapy may also be an option for treating BCCs.

The family should be informed about the course of the disease. Preventive measures including use of sunscreens is essential. Regular tumor screening for BCCs should be initiated once to twice a year beginning in early childhood to all members of the family. Early tumors may be subtle and can be misdiagnosed.

In patients who are not treated early, the BCCs can be destructive.

Abuzahra, F, Paren, LJMT, Frank, J. “Multiple familial and pigmented basal cell carcinomas in early chilhood-Bazex-Dupré-Christol syndrome”. (The authors revised the classification of symptoms of the syndrome and suggested that milia should be considered as a frequent sign.) 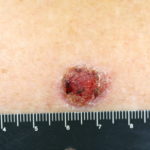