What to be alert for in the history

Patients affected with aquagenic wrinkling of the palms (AWP) complain that upon exposure to water, they note reddening of the skin of the palms, and eventually notice a whitening and thickening of the palms resembling waterlogging. Patients may notice the sensation of burning, stinging, or tingling localized to the palms.

Characteristic findings include white translucent papules that coalesce into plaques on the palms and palmar aspects of the fingers, especially the fingertips (Figure 1). These findings develop rapidly upon exposure to water. The appearance of the hands after 3-5 minutes of immersion in water resembles what those without AWP might look like after immersion in water for an hour. These findings develop within 3-5 minutes upon exposure to fresh water or tap water. However, salt water does not appear to trigger the condition.

The condition manifests in early childhood, and improves with age. Rarely, findings can be seen involving the feet, but the palms are the predominant site of involvement.

Biopsy in some patients has revealed compact orthokeratosis, acanthosis, and dilatation of intracorneal eccrine sweat ducts (hence the suggestion of aquagenic syringeal acrokeratoderma as a name for this condition by some authors).

The condition was first described in 1974 as “aquagenic wrinkling of the palms” among a group of children with cystic fibrosis (CF). A strong association with CF has subsequently been documented. In one series, 90% of pediatric patients with CF have evidence of discernible AWP. However, in an adult population with CF, the prevalence of CF was only about 41%.

A small subset of children with AWP have no identifiable mutations in the cystic fibrosis gene, cystic fibrosis transmembrane conductance regulator (CFTR). In these children, the condition appears to start during preadolescence or adolescence, to favor girls over boys, and to remit at a younger age.

Aquagenically induced wrinkling of the palms can also be induced by medications (selective cox-2 inhibitors, ACE inhibitors, angiotensin-receptor blockers, and nonsteroidal antiinflammatory drugs [NSAIDs]). This may be related to alterations in sweat electrolytes caused by these agents.

The etiology and pathophysiology remain incompletely understood at this time, but several hypotheses exist to help explain why this phenomenon occurs:

Increased expression of aquaporins have been identified in some patients with AWP. Since CFTR is involved with aquaporin expression in various epithelia, mutations in CFTR may cause alterations in aquaporins predisposing those with CF to develop AWP.

Of note, the observation that this phenomenon does not occur in concert with exposure to salt water suggests that an osmotic gradient must be present in order for water transfer to occur.

The phenomenon of aquagenic wrinkling of the palms is strongly associated with cystic fibrosis. It is suspected that those heterozygous for mutations in CFTR may have an increased predisposition for AWP.A subset of patients also report associated palmar hyperhidrosis in association with AWP.

Optimal Therapeutic Approach for Aquagenic Wrinkling of the Palms

Most patients with mild AWP do not require therapy, and the condition improves over time, abating often during adolescence or young adulthood.

Occlusive emollients prior to immersion in water may reduce the severity of the condition. Petrolatum or other hydrophilic ointments are preferred.

Aluminum chloride hexahydrate 20% applied once or twice daily may help reduce the severity of AWP.

Patients identified as having AWP should be screened for CF by sweat chloride testing. If the testing is in the equivocal range (a finding that is common among heterozygous carriers), screening for CFTR mutations should be considered to help with appropriate genetic counseling.

Aquagenically-induced wrinkling of the palms can also be induced by medications (selective cox-2 inhibitors, ACE inhibitors, angiotensin-receptor blockers, and NSAIDS. Discontinuation of these medications in those taking them may also reduce the severity of AWP. 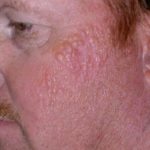