NEW YORK — Individuals with comorbid Alzheimer dementia and depression may have an increased risk for cardiovascular disease, according to data from a study presented at the 2018 annual meeting of the American Psychiatric Association, held May 5-9 in New York City.

The investigators, including presenter Dongwon Shin, identified 90 outpatients who met the criteria for Alzheimer dementia, according to the International Statistical Classification of Diseases and Health-related Problems, 10th revision. Patients with an additional diagnosis of severe depression (n=40) were matched for age and sex with patients who had Alzheimer dementia but no depression (n=50).

Early-stage dementia was evaluated on the Clinical Dementia Rating Scale and Scale for Medial Temporal Lobe Atrophy. Photoplethysmography, at high and low frequencies, was used to measure heart rate variability, which investigators interpreted to evaluate the autonomic nervous system.

Shin recommended that clinicians take depression into careful consideration when treating patients with Alzheimer dementia, as the two conditions combined may predispose patients to cardiovascular disease more than either alone. 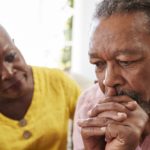