WASHINGTON — The monoclonal antibody solanezumab may have some efficacy in delaying Alzheimer’s disease progression, with data from a pooled analysis of a subgroup of patients in the EXPEDITION (EXP) and EXPEDITION2 (EXP2) trials suggesting a potential disease modifying effect.

But because of statistically significant benefits on cognition and function observed in the pooled analysis of data from the subgroup of patients with mild cognitive impairment, the researchers decided to move forward with a two-year extension trial (EXP-EXT) with a delayed start analysis, explained EXPEDITION investigator Paul Aisen, MD, of the University of Southern California in San Diego, California.

In the delayed-start extension trial, patients who were assigned to placebo in the first two trials were then given solanezumab. Patients in the original active-drug groups also continued to receive the medication. Because all participants were receiving the drug, they could not be blinded and there were no inactive controls; however, both patients and researchers remained unaware of patient assignment in the original trials.

The goal of such a trial design is to differentiate improvement in symptoms from an actual effect on the disease process, Aisen said.

A total of 1,322 individuals were enrolled in the EXP, EXP2, and EXP-EXT studies. Among patients in the original placebo groups in EXP and EXP2, 491 were switched to solanezumab and the active group consisted of 484 patients in EXP-EXT. Overall, 286 and 295 patients, respectively, completed the two-year extension. All patients received solanezumab 400 mg every four weeks — the same dosing that was used for the active group in the original study.

The primary analysis in EXP-EXT included data from the 18 months of the initial studies, plus 28 weeks of the extension for a total of 108 weeks.

The delayed-start group never “caught up” to the early-starters at 28 weeks, the researchers found. Treatment differences between the two groups were significant and non-inferior at that time point for both the ADAS-Cog14 (P=0.01) and the ADCS-IADL (P=0.043), and remained significant through most of the two years of the extension study.

The findings suggest that treatment modalities targeting amyloid in patients with mild Alzheimer’s disease may modify the underlying pathology of the condition when started early in the disease process, as demonstrated by the finding that the benefit seen in the early treatment group could not be recovered by those for whom treatment was delayed.

Despite this subtle benefit, patients continued to show worsening on the four functional measures tracked in the study through the two-year extension — an average four-point drop in MMSE scores, increases of about 10 points on the ADAS-Cog14 scale, and increases of about three points in the CDR-SB in both groups. Mean scores on the ADCS-IADL declined by about nine points during the two-year extension.

The investigators are planning on continuing this analysis method in the ongoing EXP3 study. 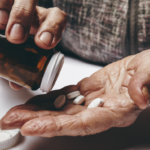